YOU ARE HERE: The Wrong Marshall ► 7. The Orphans

Coase said that after the death of their father, “Custody of the children was given to John Bentall, a brother of their mother, and they went to Totnes in Devon where, according to Mary [Paley] Marshall, another brother took charge of them” (Coase 1994, 134-35). The specific words used by Mary Paley Marshall in her note to Keynes were, “At his fathers [sic] death, the children went to Totnes, to their Uncle Benthall, who took charge of them & other members of the family” (M. P. Marshall 1924). Coase surmised that “Uncle Benthall” was Thornton Benthall.

“Uncle Benthall” was, in fact, William Searle Benthall, as is borne out in the letter that Charles Henry Marshall wrote to his aunt from Sydney on 4 May 1852, which I have already quoted. It starts:

I am afraid that sometimes you cannot help thinking me ungrateful for not writing to you, and I must confess that my conscience has but too frequently reproached me for this neglect – but my dear Aunt I hope you will believe me when I say that I very very [sic] often think of all my early Monitors, and more particularly of yourself, with the most lovely emotions of thankfullness [sic], for all that you have done for me, especially for instilling within me those sound principles of religion which I feel has often hitherto proved my safeguard, and by the blessing of God will I trust be my guide through life – I have just received a letter from my sister Louisa in which she mentions that your Children & their families had assembled at Dean’s Ground on the anniversary of your Wedding day to testify their filial homage – I much wish that I could have joined them on the occasion, but that being impossible, I can only offer you this letter as my offering of dutiful affection.

The document accompanying William’s probate provides more detail on what happened to the orphaned children (W. Marshall 1828). This document is a deed dated 10 March 1828, in which the six eldest children elected “John Bentall Esquire their natural & lawful uncle to be their Curator or Guardian for the Purposes of taking upon himself the Letters of Admin of the Goods of the said Decd [deceased, i.e. William Marshall] for their use & Benefit & until one of them shall attain the age of Twenty One years.” (Full Transcript) The youngest child, Thornton, did not participate in this election because he was younger than seven years old and considered an infant. John Benthall was not given custody of the children; rather, the children elected him as Guardian of their financial affairs. It is a poignant document with the signatures of William (aged 15), John (13), Edward (11), Louisa Maria (10), Charles (9), and Henry (7) neatly made beneath each other, the writing style moving from William’s mature script to Henry’s shaky childish writing. 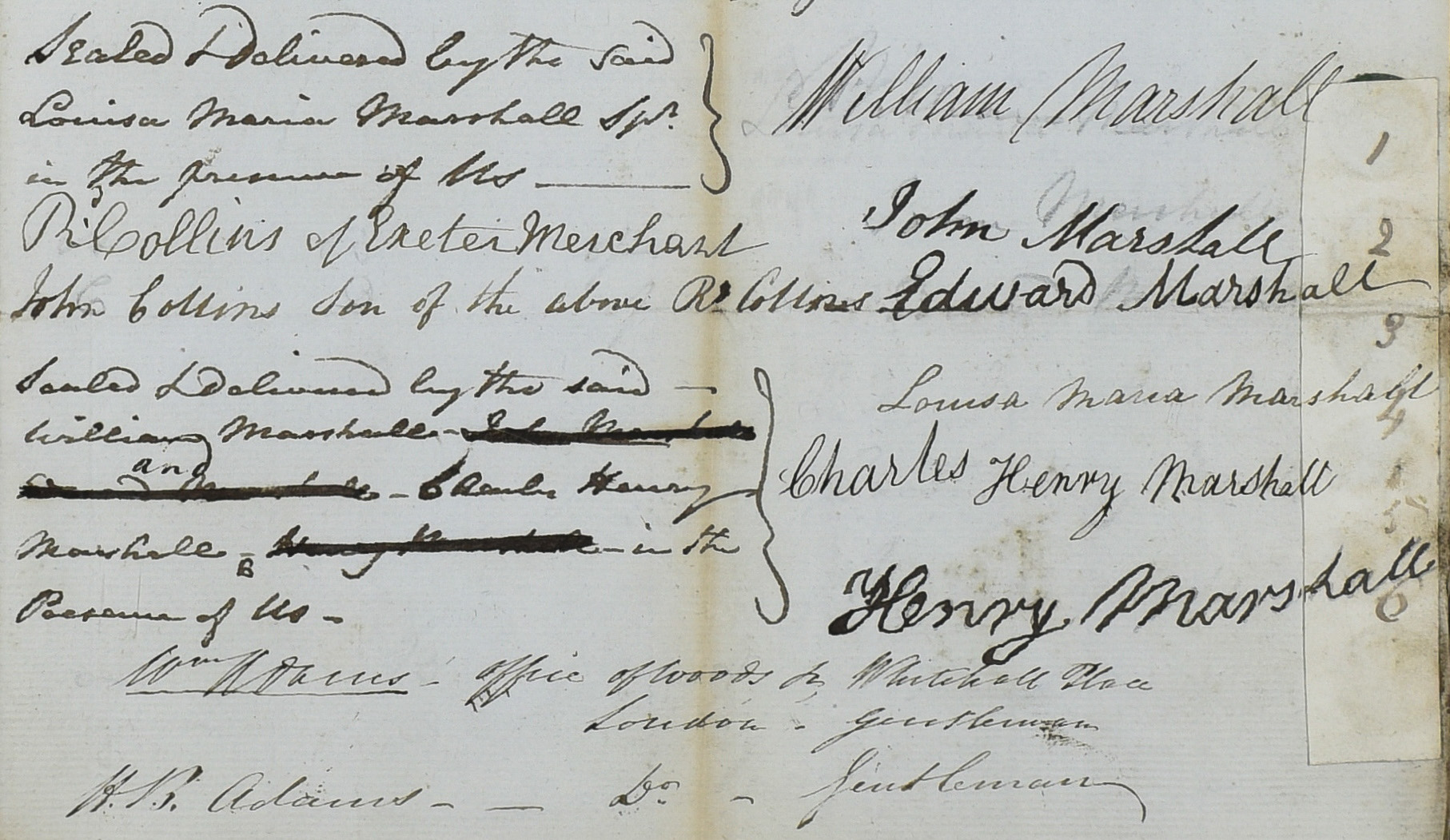 The execution of the document by the children and the witnessing of their signatures indicates that they were living in three different places. The signatures of John, Edward and Henry were witnessed by Samuel Adams of Hounslow and one of his servants, Elizabeth Varder. Louisa Maria’s signature was witnessed by Richard Collins and his son, John, in Exeter. William’s and Charles’s signatures were witnessed by William Dacres Adams and Henry Bentall Adams in London. It seems likely that William and Charles were living with their uncle, John Benthall, who was not able to witness the deed as it was in his favour. It is unclear where Thornton was living when the deed was executed, but it seems most likely that he was with his sister, Louisa Maria, with the Collins family in Exeter.

This might appear to be a desertion of the children by the Marshalls, as Groenewegen suggested when he commented that William’s brothers “had been insufficiently interested in their nephews and nieces to become their guardian” (Groenewegen 1995, 34). This was not so. The unfortunate fact is that William’s parents, all his brothers, and all but two of his sisters had predeceased him. One surviving sister, Elizabeth (Eliza), was the third wife of an older man, Philip Furse, and had no children of her own. The other sister, Anna, was the widow of Rev. Richard Buller, the Vicar of Colyton in Devon. Groenewegen was probably unaware of the true circumstances, as the family trees he presented were incomplete and incorrect (Groenewegen 1995, 28, 35). (Family Chart)

The Marshalls were not absent. As well as Eliza and Anna, William Searle Benthall and Thornton Benthall had married two Marshall sisters, Mary Ann Marshall and Margaret Eleanora Admonition Marshall. They were William’s cousins, daughters of Dr. William Marshall and Dorothy Marshall, whose 80th birthday celebrations William junior and John Marshall had attended in 1822. Richard Collins, a successful merchant in Exeter, was the widower of William’s late sister, Mary. He was the children’s uncle, and his son, John, their cousin. Mary was not alive to help, but her family was, so they did.

Samuel Adams was also an uncle as he was married to Elizabeth, Louisa Bentall’s sister. At that time, he was barrack-master in Hounslow. Elizabeth Varder was a trusted servant who served the Adams family until her death in 1862, aged 86. 16  She would undoubtedly have cared for the boys.

There is no indication as to how long these arrangements lasted, but it seems clear that the children moved to Totnes and into the care of William Searle Benthall at some point. Charles’s letter to his aunt supports Mary Paley Marshall’s statement to Keynes that this was what had occurred. We also know that, sadly, seventeen-year-old John Marshall died in Totnes and was buried there on 13 June 1831. Thornton Marshall kept a journal in later life, and, in the introduction to the article publishing extracts from this journal, his great-grandson, George Vassal Wingfield Digby, is quoted as saying that Thornton spent some of his boyhood years in Totnes (T. Marshall 1968a, 22).

At the time of William’s death, William Searle and Thornton Benthall co-owned Buckfast Abbey and the spacious manor house there.

They also had extensive property holdings at The Plains in Totnes and jointly occupied their house there.

This is the environment into which the children moved. The Marshall, Benthall, and Adams families who combined to control the politics and business of Totnes also combined to ensure the welfare of the children, with the Marshalls represented by their women.

Mary Paley Marshall, in her note to Keynes, wrote about this period (M. P. Marshall 1924):

William, A’s [Alfred’s] father was made boss over the other children & kept them in order with a slipper. …

A’s favourite Uncle was Charles Henry, who disliked his brother Williams control at Totnes, & ran away and became a cabin boy.

Coase ascribed great importance to these statements, firstly as evidence of a brutal disciplinary approach by William, and secondly as evidence of Charles’s dislike of his brother. These are themes he pursued throughout the Essays. He accused Keynes of “Another omission [which] concerned William Marshall’s treatment of his brothers and sisters [sic] when he was a boy”. 18  The story, however, seems to be just a family story. William may well have wielded a slipper, but, if he had, he could only have done so for a short time as he went to work for his uncle, John Benthall, in London, shortly after his father’s death in 1828 (Groenewegen 1995, 23). Charles was only ten at the time, so, although he did go to sea at some stage, it is very unlikely to have been as a cabin boy at this time. 19  Charles’s competency at accounting, as is demonstrated by his later employment as a bookkeeper with the Van Diemen’s Land Company, and his command of language, as is clear from the letters he wrote, strongly suggest someone who was educated beyond the age of ten, and, as will be shown, Charles’s later actions were not those of someone who disliked his brother, William. There may also have been some confusion, as William’s brother, twelve-year-old Edward, joined the Royal Navy in January 1829 (O’Byrne 1849, 728).

Keynes was probably right to omit the story.