Because my great-great-grandmother, Aletta Maria Muller, was of Afrikaans descent, I can trace an ancestry back to the earliest South African settlers of the late 1600’s and early 1700’s. Megan, on her father’s side, also traces her ancestry back to these same settlers. The population was quite small at the time so there was frequent intermarriage between families and it was almost inevitable that we would share some ancestors. The question was really about determining which ones.

The research has been both fascinating and frustrating because of the inevitable incomplete, confused, conflicting and incorrect information. We struggled until quite recently when Megan discovered some repositories of church and official records. These have been revelatory and have allowed us to resolve the roadblocks we had in each of our family trees. I commented on this process in this blog. Megan and I are officially 8th cousins because we share three 7th great-grandparents. The connections are to both of Megan’s Afrikaans grandparents via my great-great-great-grandmother, Agatha Catharina Ferreira – Aletta Maria’s mother.

The stories of our joint ancestors are part of the story of the settlement and development of the Cape by the Dutch East India Company so it is helpful to provide this context before proceeding to the individual stories. The Dutch East Inda Company was officially named the Vereenigde Oostindische Compagnie (VOC) and frequently referred to as the Companje. The settlement was initially established as a way-station on 6 April 1652 under the command of Joan (Jan) van Riebeeck. He remained as Commandeur until 1662 and owned some of the ancestors in our story. The purpose of the way-station was to provide provisions and a safe anchorage for Companje ships on their long voyages to and from Batavia, the Companje’s eastern headquarters in Jakarta, Indonesia. It also provided supplies and support to the British East India Company ships and others for a fee.

Perched as they were at the end of Africa without any nearby assistance, the settlement needed protection, so the first meaningful structure erected was a fort on the foreshore – the Fort de Goede Hoop. In 1654, they also constructed a redoubt at the mouth of the Salt River called Duijnhoop/Duynhoop to protect the approaches into Table Bay.

The next step was the development of gardens to produce the food needed to supply the passing ships. The settlement was established around the streams that ran down Table Mountain and expanded out from the Fort. The left hand map below, from 1654, shows the developing settlement with gardens and planned gardens to the west of the Fort in Table Valley (even showing the gardener’s residence and chicken house). The right hand map from 1656 shows the overall layout of the settlement across the peninsula. It shows the position of Duijnhoop (a) at the mouth of the Salt River and the Companje store, Groote Schuur, out on the eastern flank of Table Mountain. The views of Table Mountain across Table Bay are to the South so West is to the right and East to the left.

Initially, the production of food was undertaken by Companje employees, but in 1657, the Companje instituted a system of vrijburghers (free citizens) who were released from Companje service by the grant of a vrijbrief (free[dom] letter) and allocated land which they could technically farm for their own account. They were, however, only permitted to trade their produce through the Companje, even to the local community, and the Companje also reserved the exclusive right to trade with the indigenous population, the Khoikhoi (Hottentots). As will be discussed, some of the shared ancestors were amongst the initial vrijburghers and these restrictions caused them problems. The following map from 1658 shows the allocated farms along the eastern side of Table Mountain below Devil’s Peak from the Salt River to Groote Schuur and beyond. 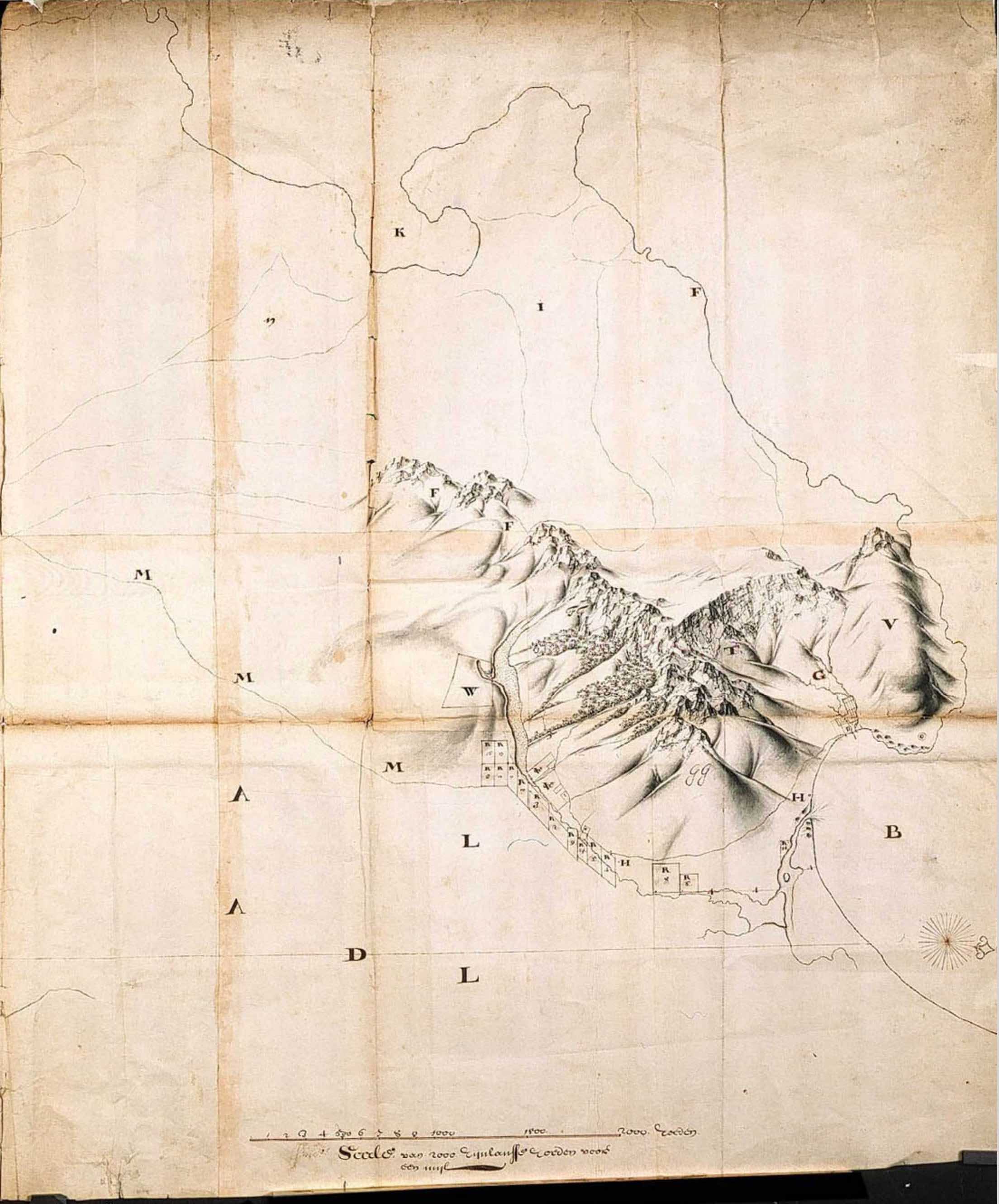 Map of lands given to vrijburghers
Nationaal Archief

From 1666, the Companje set out to replace the earth and timber Fort with a permanent, stone Castle. The following map from 1665 shows the layout of the settlement with the position of the planned Castle. Make a note of Heerestraat which is on the bottom right near the foreshore. It is relevant to the story. 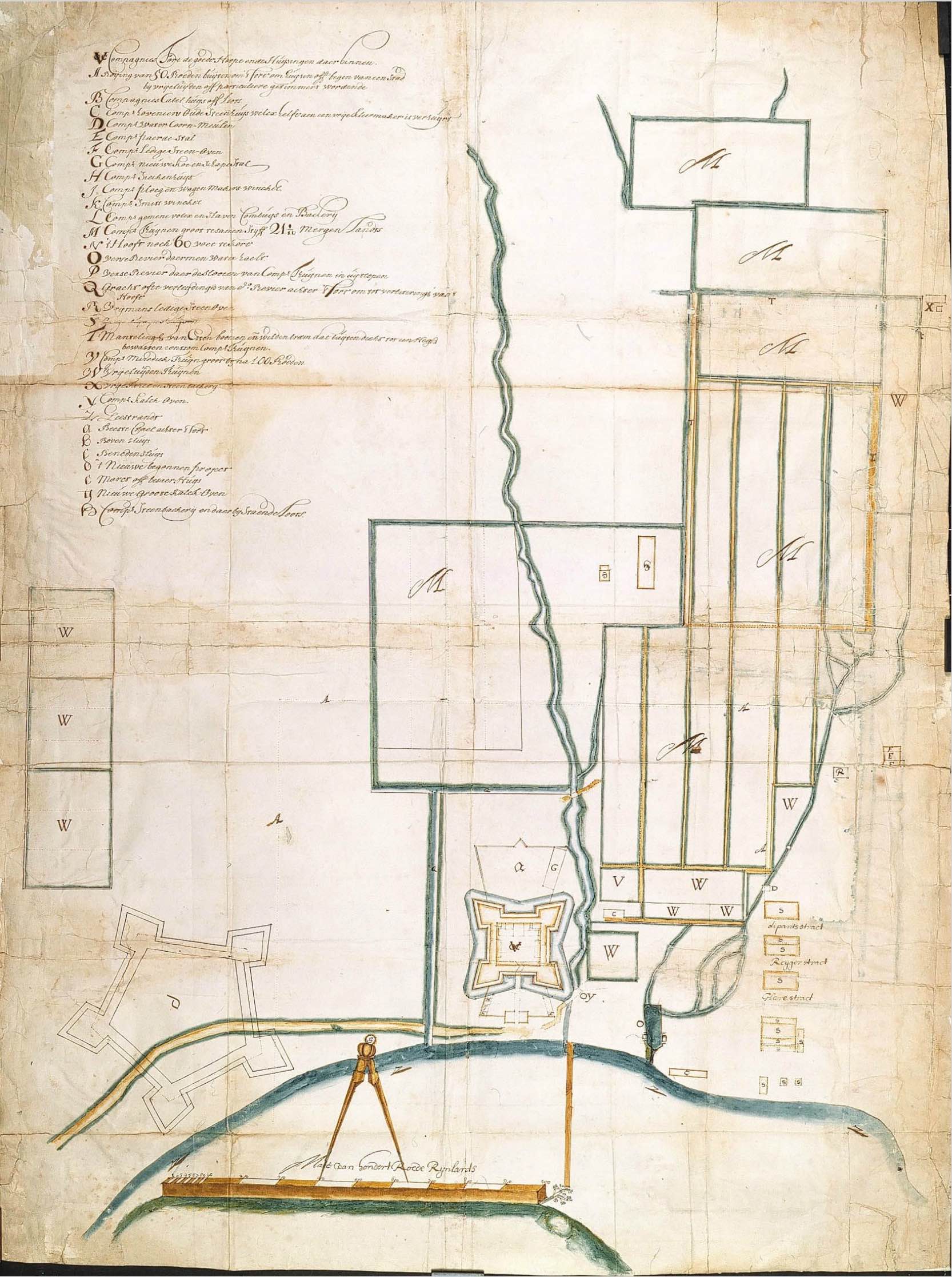 The settlement then developed around the Castle with gardens extending up Table Valley as the following map from 1726 and etchings from 1741 show:

Our family stories include a number of women who were slaves. Whilst their status as slaves undoubtedly caused significant hardship (and some of their difficulties will be discussed), slaves were property and the Companje kept good property records so we have information about their lives.

17th century Dutch names generally used patronyms and toponyms, even when family names or surnames were known or in existence and being used – eg. Willem Schalksz (Schalkszoon or Schalks’ son) van Ouderbeijerland [family name Van der Merwe]. Slaves were not accorded family names and were generally recorded just by their personal names and sometimes with toponyms. For slaves, these toponyms frequently changed over time. This was probably due to bureaucratic laxity and/or ignorance when dealing with the places of origin and/or purchase of enslaved and manumitted 1  people, e.g.: van Malabar, van Bengale, and van Paliacatta. Those born at the Cape are generally shown as ‘van de Caep’, ‘van de Caab’ or other variants.

Slaves could not marry. Any children born to them were also slaves, but, if the father was a European, the child was freed at age 25. Young children of a slave women were also freed if their mother was freed. The Cape did see many slaves freed who went on to marry other ex-slaves and Europeans. They settled, raised families and generally integrated into the society. Many prospered and some, in fact, founded a number of well-known Afrikaans family lines, including some relevant to our family story.

Slaves marrying Europeans were almost exclusively women marrying European men – in many cases the fathers of their children. There was, however, one man born a slave at the Cape who married an aristocratic white woman to found a well-known Afrikaans family. He is one of our shared ancestors and we will discuss him in some detail.

I have created charts of our interconnections to assist the narrative. They cover twelve generations with a number of crossed marriages. They are therefore quite complex so only the generations where linkages occurred are shown. It was necessary to mix the generational levels in order to fit the charts onto a single page so the generational levels are indicated for pivotal ancestors. Common ancestors are shown in red italics with the closest three shown in bold. The family tree has been split into two for clarity. The first tree shows our shared 7th great-grandfather, Johannes Potgieter, who links to me via the Ferreiras, to Megan’s Ouma via the Roussouws and Van Eedens, and to Megan’s Oupa via the Croesers. 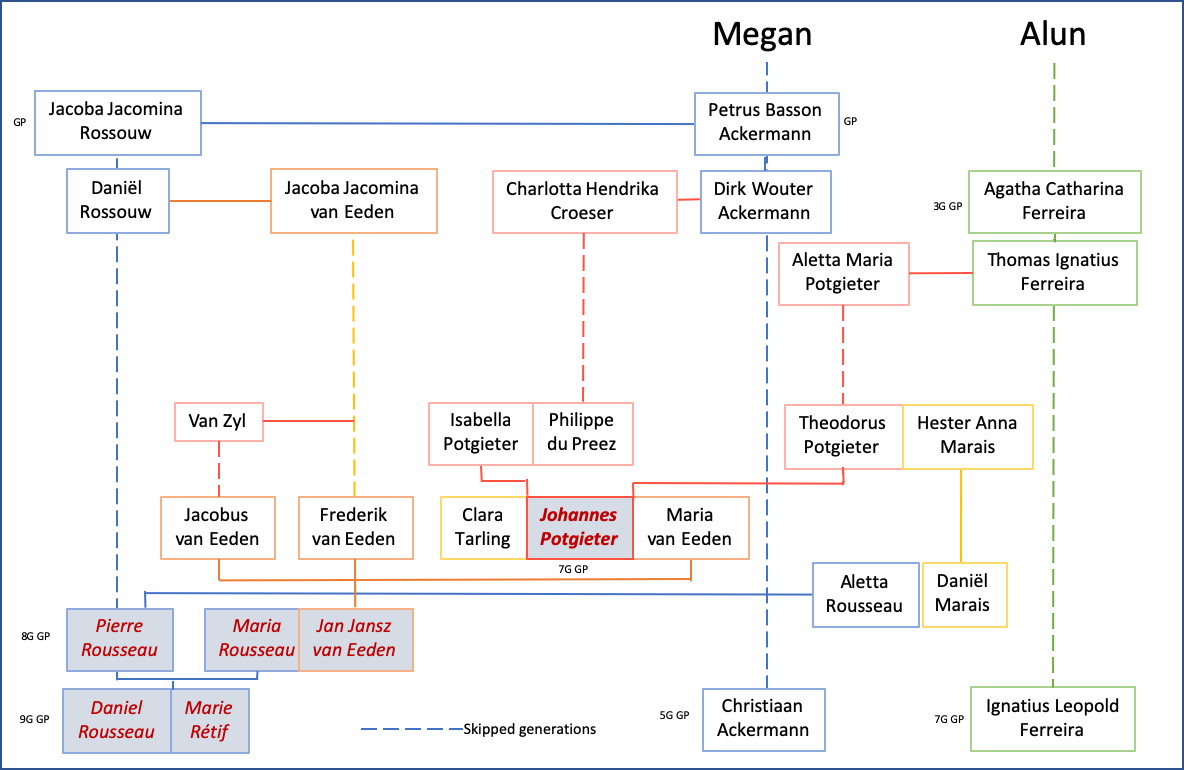 The second shows our shared 7th great-grandparents, Marthinus Jacobus van Staden and Catharina Botha, who link to me via the Ferreiras and to Megan’s Ouma via the Bruwers into the Van Eedens. 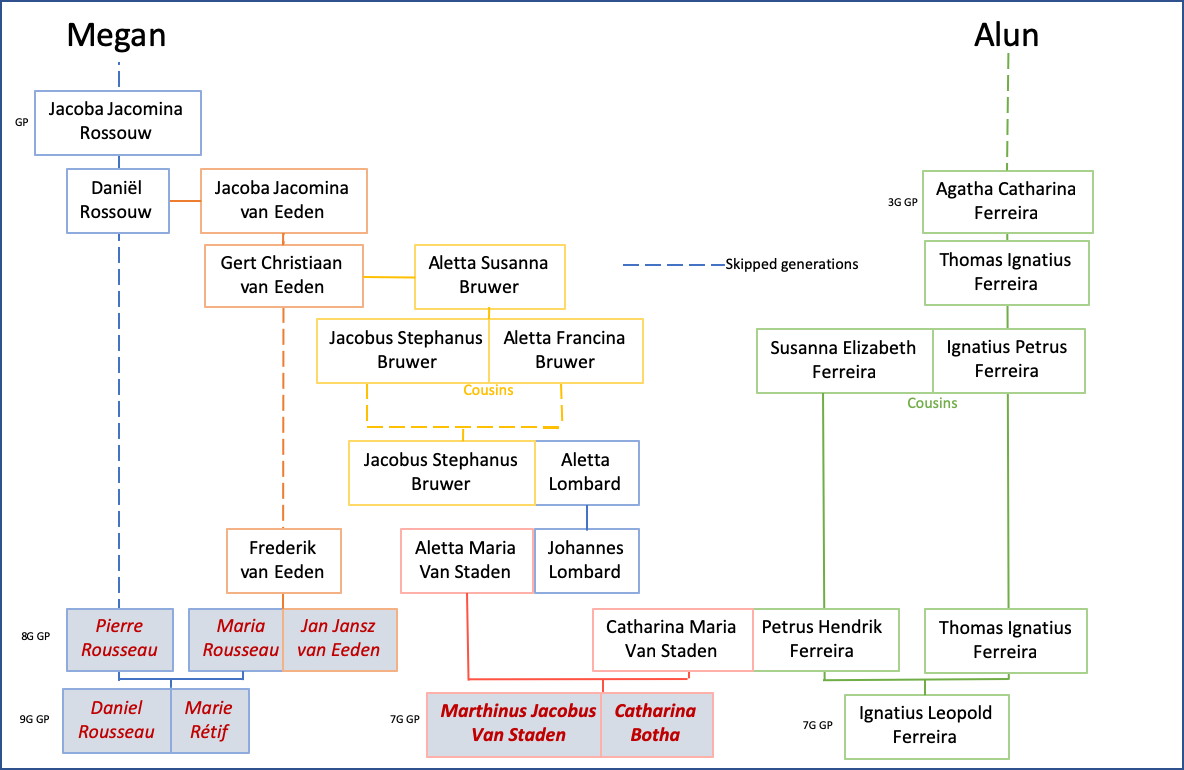 Our complete interconnected family tree is too complicated for this article which is why I have constructed simplified diagrams. For those interested, two views of the tree with all its complexity can be found in our blog post HERE.