Richard Walford Stevens in Zululand and as an older man (light jacket); the battlefield of Isandlwana; Reuben Ayliff; Empress Eugénie of France.

YOU ARE HERE: Shared Ancestors ► 2. Ancestors with shared experiences

The connection to Megan is that her grandmother was an Ayliff from Grahamstown. Her parents had been involved with the establishment of the school, and her brothers had been amongst its earliest pupils. The Ayliff family also left a bequest to finance a prize each year for the most academically successful senior student. I won that prize in 1969. This pleased Megan’s grandmother no end. She also, amusingly, in later years thought that it was also wonderful that I had inherited the Ayliff freckles and ginger hair.

The settlement of British subjects to the Eastern Cape in 1820 was part of the colonial government’s attempt to improve security and control in this then border region of the colony. The new settlers would help Anglicise the area which was populated predominantly by Afrikaans farmers who had no love for the British administration. They would also provide a buffer between these farmers and the Xhosa peoples further to the east with whom there were increasing tensions and conflict. Grahamstown, where I went to school, is 1820 Settler country. It was here and in the surrounding areas that the settlers primarily took up residence.

Their influence and presence in the area continues to this day via their descendants. When I was at school, a significant proportion of my fellow students had surnames like Dold, Wood, Purdon, Hobson, Collett and others that can be found on the muster rolls for the ships from 1820. Grahamstown was also littered with references to these families. For instance, one of the streets bounding Kingswood College is Ayliff Street.  It was a little daunting for me and other upcountry borders who felt somewhat excluded from the clique of settlerhood. There was no Stevens on the muster rolls. 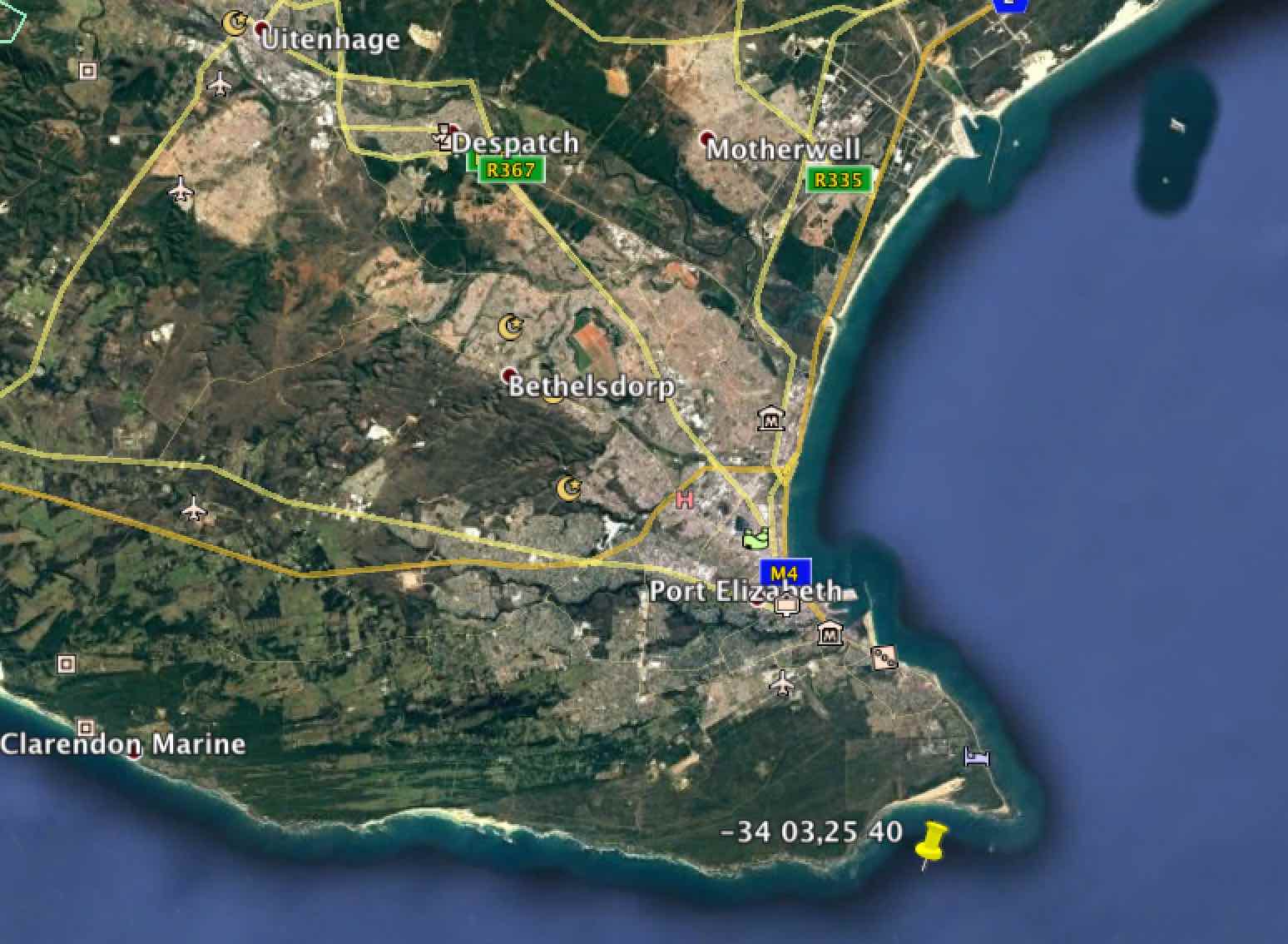 John Ayliff was on the muster roll, but, interestingly, not as John Ayliff. He went to South Africa as part of the Wilson party on the La Belle Alliance as Ayliff Dold, the son of Mathew and Jane Dold. This saved him the price of the fare. His links to the Dolds appear to have been via their daughter Jane, because on arrival at Port Elizabeth, he married her. The wedding was unusual because, with no marriage officer present, John and Jane boarded the man-of-war HMS Menai and were taken to sea and married beyond the territorial limit. Their marriage certificate gives their place of marriage as a latitude and longitude!

John Ayliff was a silk weaver from Spitalfields in London, but became a farmer at Beaufort Vale near Bathurst on the land allocated to the Wilson party. As for many of the settlers, this enterprise was not successful due to the failure of European style crops. He left the land, worked in a number of government posts and in 1827 was ordained as a Methodist minister and became a missionary. In this role he is generally credited with protecting the Mfengu (Fingo) tribe from the Xhosa. He was a skilled linguist proficient in Dutch and Xhosa. He created the first Xhosa dictionary and also translated the Bible into Xhosa.

This proficiency passed to his children, most of whom occupied prominent positions in colonial society of the day. Three were members of parliament – two cabinet ministers. One became Colonial Treasurer for Natal. Three also worked as interpreters including Reuben about whom there is more to tell. The youngest of them, James, famously escaped with his life when captured by Xhosa warriors as a child because of his fluency in their language.

Two other settlers present in Grahamstown at this time were John Norton and his wife, Sarah. They were Jewish. He was from Deptford, Kent, and she from Smithfield, London. They too had travelled to South Africa as part of the Wilson party on the La Belle Alliance. They too became farmers at Beaufort Vale. 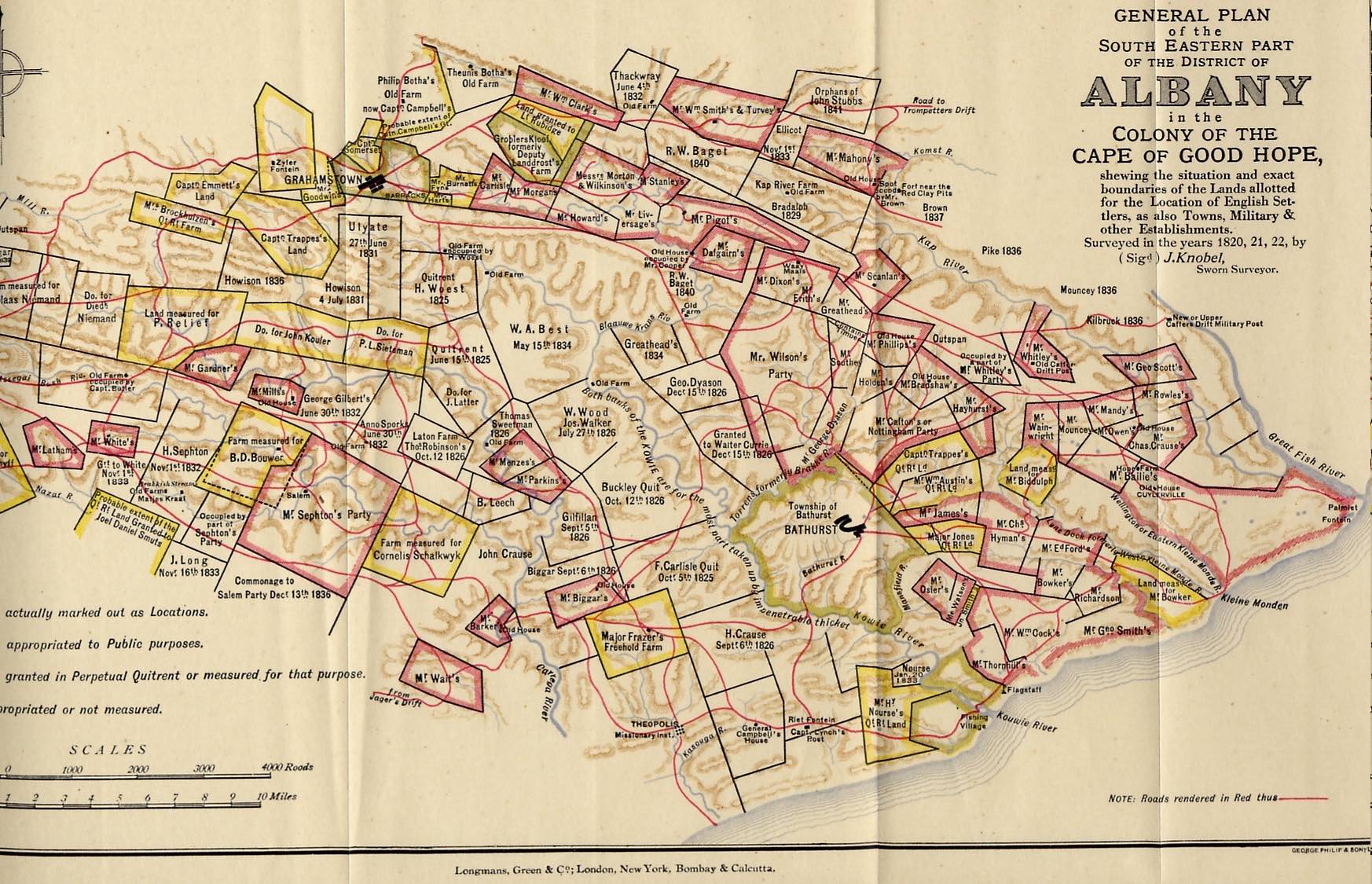 They took to trading in 1822 and moved to Grahamstown in 1826 where John became a successful merchant. Their fourth son was born in 1823 and named Benjamin John. In 1852, he would marry Aletta Maria Muller at Somerset East. He was my great-great-grandfather. John’s and Sarah’s second son, Joshua Abraham, also became a trader and famously went to California for the gold rush and became Emperor of the United States. But that is another story.

An event of the Anglo Zulu War, intriguingly, also provides a connection between Megan and me. The event was the death of Louis Napoleon, the Prince Regent of France. He was the son of Emperor Napoleon III of France who was deposed in 1870. The Emperor, his wife, Empress Eugénie, and the young prince fled to England. They were accepted into British high society and the prince trained as an artillery officer at the Royal Military Academy, Woolwich. When reinforcements were called for following the British defeat at Isandlwana, the prince sought to join the force being sent. He was permitted to do so, but only as an observer. He, nonetheless, took the sword that his great-uncle, Napoleon Bonaparte, had worn at Austerlitz.

In South Africa, he was attached to Lord Chelmsford’s staff. On 1 June 1879, the reconnaissance sortie he was part of was dismounted when it was ambushed at a cattle kraal 28km North East of Isandlwana, near the Ityotyozi (Jojosi) River. Two troopers and the guide were killed. The rest, including the prince, attempted to flee, but he was unable to mount his frightened, galloping horse and was run down by the Zulu. His body was recovered the following day and returned to England where he was buried alongside his father. Queen Victoria paid for a memorial to be erected at the place he was killed.

The Empress was devastated and decided to undertake a pilgrimage to the place where he had been killed for the first anniversary of his death. Her friend, Queen Victoria, agreed to this and in fact paid for the trip. Eugénie travelled to Cape Town and then Durban on the Union Steamship German leaving Southampton at the end of March 1880.

This is where the family connections to Eugénie begin because also travelling on the German were two of Rev. John Ayliff’s daughters, Esther and Sarah Ann. The family story is that Sarah Ann wished to speak to Eugénie, but was advised that this was inappropriate because Eugénie was a princess and an Empress. Sarah Ann’s purported reply was that Eugénie was a grieving mother and proceeded to speak to her. The engagement was clearly more than a one-off chat because a visit by Sarah Ann and Esther to Eugénie’s home in England in 1886 is reported as follows:

Yesterday, Mr. and Mrs. Ayliff from the Cape of Good Hope, and who are traveling in England, lunched here, bringing with them a whole bazaar full of curiosities from South Africa for the Empress. They had been very kind and had entertained her in the Cape in 1880. They are simple genuine people, and enjoyed their visit here very much. They know Mr. Wilmot out there, it seems. (Carey 1920, 171-172)

The visitors were actually a Mister and the two Misses Ayliff who were photographed in the gardens at Farnborough Hill. 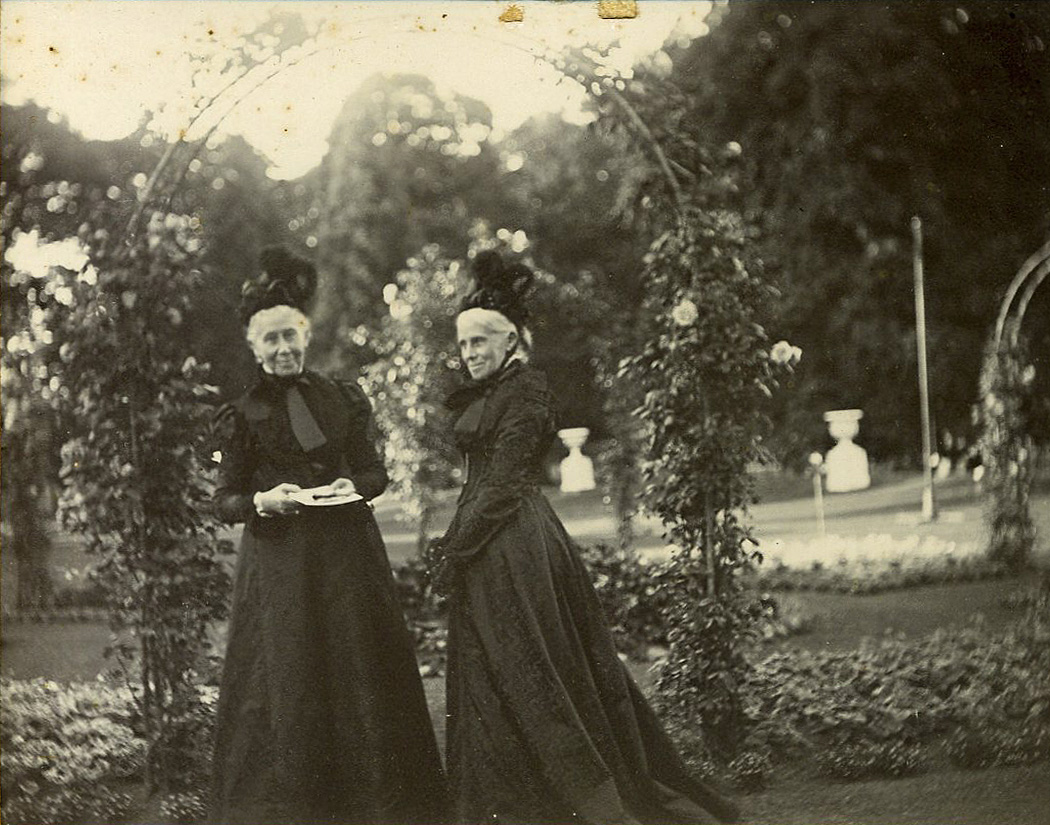 It is not clear how or where they entertained Eugénie in the Cape because she only stayed in Cape Town for a few days and then travelled on the German to Durban. Maybe the sisters did the same and disembarked at Port Elizabeth. Sarah Ann is, however, reputed to have taught Eugénie some Xhosa and to have influenced Eugénie to select her brother, Reuben, as a translator for the party going to Zululand.

For most of her Zululand trip, Eugénie travelled by carriage escorted by a contingent of Natal Mounted Police (NMP). They escorted the party from the end of the train line to Pietermaritzburg and then for the remainder of the 800 mile, fifty-day journey, providing protection and pitching and striking the camp. This completes the connection because one of the members of that police contingent was my great-grandfather, Richard Walford Stevens. The NMP contingent is shown in the following photograph with 256 Trooper RW Stevens in the front row on the far right. 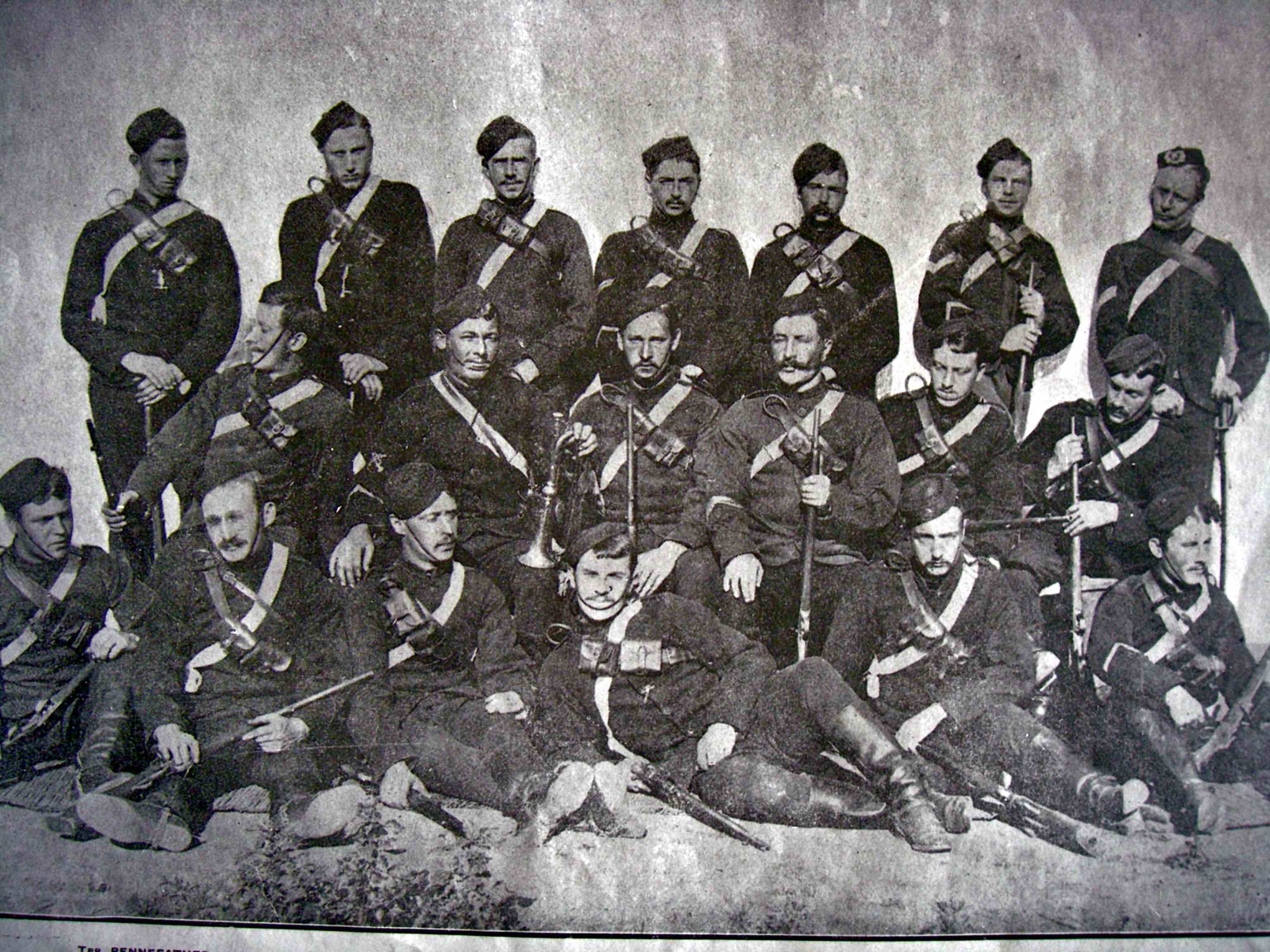 It is intriguing to contemplate what interactions might have taken place between Richard Walford and Reuben Ayliff. Quite possibly none given their very different positions, but they went to all the same places and experienced all the same events. This included visiting the battlefield at Isandlwana where Eugénie insisted on helping bury the remains of the British dead which still littered the battlefield eighteen months after the battle. It is difficult to imagine what emotions the young Richard Walford would have experienced.

Eugénie gave Reuben Ayliff a silver and leather brandy flask in appreciation. He was an avowed teetotaller and the family story is that when she presented it to him, he said, “But, I am a teetotaller,” to which she replied, “That is why I am presenting it to you.” The flask became an Ayliff heirloom to be passed to teetotallers in succeeding generations. The Troopers of the escort received £100 to share amongst themselves and their Sergeant received a gold watch and chain. The sisters also had a birthday book signed by the Empress.