YOU ARE HERE: Shared Ancestors ► 6. Van der Merwe and Cloete

Aletta van der Merwe’s parents were Willem Schalk van der Merwe (1640-1716) and Elsje Cloete (1655-1702). Willem Schalk, the stamvader of the large Van Der Merwe clan, was from Oud-Beijerland near Rotterdam 4  and arrived in Cape Town in 1661 on the ship Dordrecht. He is shown as being a haakbusskutter or arquebusier 5  on that ship. He initially worked as a labourer for the Companje gardener, Hendrik Boom, but fairly quickly received a vrijbrief and was released from Companje service. He re-joined the Companje in 1663 as an adelborst 6  responsible for agriculture. (Geni: Van der Merwe Archive)

Soon after this, Willem Schalk had a relationship with an African slave woman, Koddo van Guinea, who had been bought in Benin (West Africa) and brought to the Cape in 1658. 7  This is referred to in a formal complaint against Willem Schalk made in late 1664 by Pieter Cruijthoff, the person in charge of the Companje store at Groote Schuur. The complaint was that Willem Schalk and another man had been drunk, had vandalised the kitchen at Groote Schuur and had threatened Cruijthoff with a gun. He also complained that Willem Schalk had abandoned his guard post and returned to the kitchen to ‘smoke tobacco’ and commented:

All this he did on account of a certain female slave by whom he has a child, and whom he had accommodated in the kitchen at the time of her lying in. He likewise, every hour of the day, took care of her by preparing her food and fetching water and fuel. What is more, when she was being confined he came knocking and begged me to give him his brandy [ration]. I gave him two measures which he took to her and they enjoyed it as a pick-me-up. From this you can gather what connection there is between the two.

Their daughter, Maria Schalk, born in September 1664, was baptised and she was emancipated in 1686 by Governor Simon van der Stel while working on the Constantia Estate. She went on to marry Paul Heyns and thereby found the Heyns family in South Africa. She also shows up in the Potgieter story as she was living with Anna van Guinea in Table Valley when Lijsbeth Sanders deserted her fiancé and sought sanctuary with her foster mother. As a result, Maria was dragged into the subsequent court cases as a witness. Koddo was herself emancipated in 1687 along with her de facto husband Abraham van Guinea and they went on to farm in the Stellenbosch area. No link to either Megan or me, but an interesting connection.

Willem Schalk left the Companje’s service again in 1666 and married Elsje Cloete in 1668. He was clearly a character. In 1664 he had the run-in with Pieter Cruijthoff. In 1665, he was convicted of malicious damage to property along with two others. (Upham 2014b, 57). Then, in 1668, within three weeks of his marriage, he was convicted of trading cattle with the indigenous population and sentenced to be flogged. This sentence was commuted and he was fined fifty Rijksdaalders. 8  Elsje also came to the attention of the authorities and is recorded, in 1678, as having knowingly supplied food and tobacco to escaped Khoikhoi prisoners. (Geni: Van der Merwe Archive)

Agriculture was Willem Schalk’s business and he was commended for his skills on a number of occasions. As a farmer he moved around as the settlement expanded and developed. In 1672 his shepherd is recorded as dealing with the Khoikhoi near Tygerberg so he must have been farming in that area. (Geni: Van der Merwe Archive). In 1677 he and Pieter van der Westhuizen were granted a lease on property surrounding Hout Bay and four years later, were granted the land freehold. This property was the farm Kronendal – one of the original Cape farms. The well-known Cape-Dutch homestead, now a restaurant on the main road in Hout Bay, was built much later. (Stamouers: Van der Merwe);

In 1688, Willem Schalk was permitted to move to Drakenstein as the settlement expanded and in 1692 was granted farmland on the Berg River. This was the farm Kunnenberg which was the then standard 60 morgen in extent and had a frontage of 60 roods (240 yards) on the Berg River, 9  and it seems that they later moved to Franschhoek (Booyens 2009).

The Cloete family were Catholics from Oedt/Ödt, which was in the ecclesiastical district of Köln/Keulen/Cologne, Germany. 10  Elsje and her older brother, Gerrit, were born there as were their parents, Jacob Cloete (1630-1693) and Sophia/Fijtje/Feigen Radergoertgens (1624-1665). Elsje was baptised as Adelheidis Klauten on 28 February 1655. (Booyens 2009)

Jacob went to the Cape in 1657. There are suggestions that he was with the founding fleet, but these aren’t sustainable as he is not recorded in the muster rolls for 31 May 1657 or earlier. He became a vrijburgher on 10 August 1657 and in his vrijbrief he is listed as an adelborst (Leibbrandt 1900, 264). Two ships arrived between these two dates, the Maria on 13 July 1657 and the Verenigde Provincien on 7 August 1657. Only one person left the Maria, and it wasn’t him, so he must have arrived on the Verenigde Provincien. He received his vrijbrief and grant of land on the Liesbeeck River three days later on 10 August 1657. This quick grant of land was probably due to his association with Harmen Remajenne, also from Cologne, who was well regarded by Van Riebeeck and was in the first group to receive vrijbriewen on 14 April 1657. Jacob was required to work his land diligently for twelve years:

He was the 20th man to become a free burgher and one of the first two to receive an individual land title. His grant is shown as the green quadrilateral on the following map. This location would have placed it across the river from the current village of Rondebosch – between the river and Rondebosch Common. 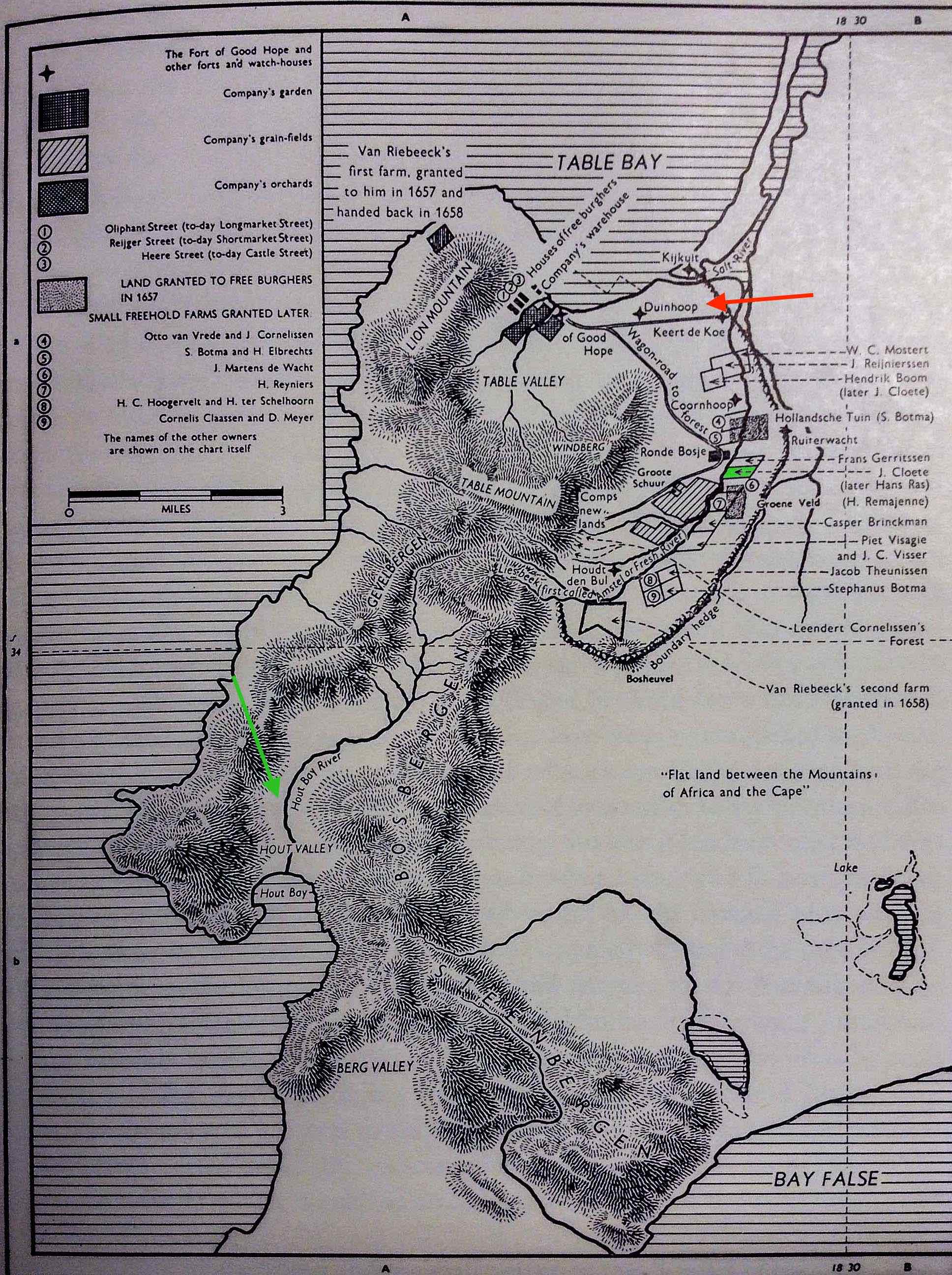 Click on the map to get a full sized image. The map is marked to show Hout Bay where Willem Schalk farmed (green arrow), and the Duijnhoop redoubt (red arrow) that will be mentioned shortly.

Feigen, Elsje, and Gerrit arrived at the Cape almost two years after Jacob, on 16 March 1659, on the Arnhem. This was a difficult time at the settlement because the Khoikhoi were increasing their raids and were attacking homesteads and had killed a number of burghers and Companje servants. The period is frequently referred to as the Khoikhoi War. The Cloetes were directly impacted. On 21 May 1659, Van Riebeeck recorded in his Journal:

The burgher Boom [ex Companje gardener] has built a very good house … [he is] resolved to abide the worst and to defend their treasure and lives … as long as possible before retreating to the redoubt [Duijnhoop], whither the wives and children of Jacob Cloeten and Jan Martens have retired leaving their husbands at home to take care of their houses and see what it is to come to. (Leibbrandt 1897, 23)

In response, Van Riebeeck created the first Kommando the next day – armed parties of farmers and citizens to pursue the Khoikhoi and protect the settlement.

The Cloetes settled into their life at the Cape and following the arrival of Rev. Cornelius Walrandt on 3 April 1660, Van Riebeeck recorded in his journal:

April 4th (Sunday). – Cloudy sky and wind as above. The aforesaid minister preached on the shore and baptised 6 children viz.

One of the Free agriculturalists, Jacob Cloeten, Catryn. (Leibbrandt 1897, 117)

Jacob got on with running his farm, but like his future son-in-law, Willem Schalk, he had repeated run-ins with the authorities for illegal trading of cattle with the Khoikhoi.

On 28 May 1665, the family suffered a major setback. The new Commandeur, Zacharias Wagenaar, recorded in his Journal:

In the afternoon we heard from our chief surgeon that shortly before, the wife of the agriculturist Jacob Cloeten had died in the Lord. In her the poor man and his four little children have lost much. (Leibbrandt 1901, 147)

This left Jacob in a predicament as a sole parent with four young children and little prospect of remarriage. There were very few unattached women at the Cape at the time and he was a Catholic in a deeply Protestant community. It was in this situation that he consented to the marriage of his thirteen-year-old daughter, Elsje, to Willem Schalk van der Merwe in 1668.

His twelve year contract with the Companje expired in 1669, but he still needed to work off his original employment contract. So it was not until February 1771 that he sought, and was granted, permission to leave the Cape. By this stage, Elsje and Willem Schalk had already started their family and Gerrit, now twenty, was gainfully employed. Jacob therefore placed his young son, Coenraad, with Wouter Mostert of Mostert’s Mill and Catryn with Frans Gerritsz and his wife, and left for Europe.

There is no confirmed information on what occurred with Jacob in Europe, but there is an intriguing marriage recorded for the St. Vitus Catholic church in Ödt (the church in which Jacob and Feigen married and their children were baptised):

There is also a baptism for twin girls, Maria and Anne, to this couple on 23 March 1673. Unfortunately, there is nothing to confirm that this is our Jacob, but it is a possibility. If it was him, he returned to the Cape in the Companje’s service without them some time after 1680. In 1686 he was prosecuted again for smuggling cattle and sent back to the cattle post at Klapmuts with a final warning that the death penalty awaited him for any further infractions (Upham 2014a, 112). On 23 May 1693, Governor Simon van der Stel recorded in his Journal:

This evening between 8 and 9 hours Jacob Cloeten, a corporal in the service of the E. Companje, was murdered not far from the castle and near the butchery, he was the oldest of the Company’s servants having helped lay the foundations of this colony, he was the first freeman although he later returned to the Company’s service … they found him grievously assaulted with three deep blows in his head and two stab wounds in his chest, all five fatal, as well as 25 lesser injuries, lying crumpled in his own blood with his sword/rapier alongside him still in its scabbard, so he must have been treacherously assaulted because he was a determined man who was as fleet-of-foot and as fit as a young man of 25 years. (Booyens 2009)

The location of this grisly murder can be seen in this painting. The vleeschhuys/Slacht Huijs/Butchery is the building in front on the far right. Click on the picture for a full size image. The painting is from a later time, but the town layout did not change in the interim.

Elsje and Willem Schalk had thirteen children, the first when Elsje was fifteen – named Sophia after Else’s mother. She is not linked to us. Megan and my common link is via their fifth daughter Aletta, but Megan also has links to three of their other children. Two link via multiple intermarried lines to the Van Eedens and to the Rossouws and thereby to Megan’s Ouma. The third links to the Croesers and Megan’s Oupa.

We will now contemplate the Botha connection to the Snymans.