YOU ARE HERE: The Wrong Marshall ► 11. Alfred’s birthplace

Coase made much of the Census records of Alfred’s birthplace as part of his thesis of a deceptive family from straitened circumstances. Groenewegen repeated these claims. In order to analyse their claims, I have carefully examined the Census returns from 1851 to 1911. Stephen Littlechild carried out a similar analysis in 2012 and I generally agree with his analysis of the recorded details but have some additional comments (Littlechild 2012).

1851
In the 1851 Census, Alfred, unsurprisingly, was recorded by his father as being born in Bermondsey.

Littlechild, when analysing this return, was incorrect in placing Alfred’s aunt, Louisa Maria Marshall, as a servant in the household. He appears to have come to this conclusion because there was a Louisa Marshall recorded as a servant. The listed Louisa Marshall, however, was born at Appledore, Devon in 1811 whereas Louisa Maria was born at Mauritius in 1818. William also would never have recorded his relationship with his sister as “servant” even if she had been working for him. She wasn’t. Louisa Maria was, in fact, at Kenton Cottage in Devon with her aunt, Eliza Furse (neé Marshall).

1861
Alfred aged 18 and Walter aged 8 are shown as lodgers at Spring Hill, in Ventnor on the Isle of Wight. Their places of birth are given as Bermondsey and Clapham respectively with Alfred the respondent.

1871
Coase cited the 1871 Census record as being an example of deliberate concealment by Alfred who avoided revealing his place of birth by the subterfuge of only providing the county in which he was born. This supposedly allowed Alfred to conceal his birthplace without lying (Coase 1994, 121). The Census record for St. John’s College, Cambridge, is as follows:

This is interesting because Alfred’s birthplace is actually written as “Do” (“ditto”) rather than “Surrey”. It is his brother Walter’s entry above his that shows “Surrey”, yet neither Coase nor Groenewegen acknowledged Walter’s entry, or that Walter was probably the respondent or the informant for the College’s respondent. If it had been Alfred, he would have been listed first. This is pertinent, because ten years earlier, when Alfred and Walter were also together and away from home, with Alfred the respondent, Alfred’s place of birth was given as Bermondsey.

1881
The Marshalls were now married and living in Bristol. Alfred’s place of birth was given as Sydenham – which is where the family had moved to from Bermondsey. The county was given as Kent in a separate column, but this was crossed out and Devon added. Coase surmised that the confusion over the county was due to the respondent not knowing where Alfred was born and that this was because he or she had been misled by Alfred. This is not a credible explanation because the “Kent” and “Devon” are each in different hands from that of the collector and are written with different pens. They were most likely added to the return when it was being processed and reflect confusion amongst the processors rather than anyone deceiving the respondent whose identity is unclear.

1891
The Marshalls were now living in Cambridge at Balliol Croft, 6 Madingley Road. Alfred’s place of birth was given as Croydon, Surrey. This is unusual as Alfred’s family never lived at Croydon and it, therefore, seems unlikely that Alfred would have supplied this information. The only other people present were his wife and their servant, Sarah Payne. Coase believed that the respondent had been Mary Paley Marshall because her occupation is shown as “Lecturer, University”; something which Coase felt Alfred would have been unlikely to have done (Coase 1994, 149). Littlechild questioned why Coase would have had this opinion as her occupation had also been omitted for the 1881 Census for which Coase had also felt that Mary Paley Marshall was the probable respondent (Littlechild 2012). Coase’s opinion, however, is reasonable given Alfred’s well documented views on female employment (Groenewegen 1995, 497). 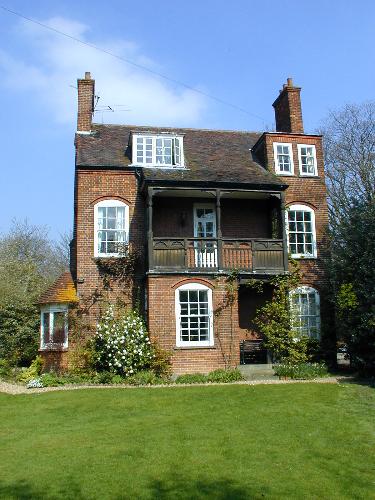 1901
The 1901 Census (not available to Coase and Gronewegen) again recorded Alfred as born in Bermondsey. We can be sure that the information was provided by Alfred himself, as the only two people listed at Balliol Croft were Alfred and their “faithful” servant, Sarah Payne (M. P. Marshall 1947, 41). Mary Paley Marshall was in Bournemouth visiting her mother.

1911
The 1911 Census (also not available to Coase and Groenewegen) raises some questions. It was signed by Alfred and shows his place of birth as Sydenham. I had no reason to doubt Alfred’s signature, but Littlechild had the handwriting analysed to show that it was Alfred’s. It provides no occupation for Mary Paley Marshall, which accords with Coase’s opinion that Alfred would be unlikely to nominate an occupation for her.

Littlechild argued that Mary Paley Marshall had told the enumerator the number of years that she and Alfred had been married thereby allowing the enumerator to correct Alfred’s omission of this information. He further argued that in doing this, Mary would have had to have read the return, so must either not have known Alfred’s true place of birth or had simply accepted his statement that it was Sydenham despite knowing that this was wrong. He then criticised her and her motivations for doing this. His analysis is not correct. Firstly, it is not plausible that the enumerator would have dealt with anyone other than the respondent regarding any issues related to the form. He would have dealt with Alfred and not Mary. Secondly, Alfred did, in fact, provide the number of years he and Mary had been married, but only against his own name with a curly bracket linking the two records. The person who added the number to Mary’s entry was not the enumerator and therefore probably not present at Balliol Croft. He or she merely needed to copy Alfred’s entry. 26

The 1881 return is consistent with the 1911 return so it seems most likely that Alfred was the respondent in 1881 – as proposed by Littlechild. The 1891 return is not consistent with any of the other returns, shows a place of birth where Alfred’s family never lived, and shows an occupation for Mary Paley Marshall so it seems most likely that she was the respondent in 1891 – as proposed by Coase. Given that she also told Keynes that Alfred had been born in Clapham, it seems reasonable to assume that she did not remember where Alfred was born (except that it was somewhere in the south of London) nor, it seems, was she that interested. She doesn’t appear to have paid much attention to what Alfred was giving as his place of birth. We can also see that Alfred did know where he was born and was happy to say so, but not always. He seems to have been coy about his place of birth when his wife was present. The Census returns for the period were therefore:

[Addendum: 1921 Census
The 1921 Census, taken on 19 June 1921, was released in early January 2022. It was hoped that this might shed more light on Alfred’s nominations of his place of birth. Unfortunately, it has not because no census return was submitted for Balliol Croft, 6 Madingley Road and no return can be found for Alfred and Mary at any other address either. This suggests that they might have gone abroad, but they did not. Mary Paley noted in communications with Keynes, that she and Alfred had had an extended holiday in Dorset in the summer of 1921 (Groenewegen 1995, 716). Alfred also wrote to Sir Frederick Macmillan on 29 June 1921 from Sea Vale House, East Lulworth, Wareham noting that this was their “Address for at least two more weeks” (Whitaker 1996, 379). Two census returns were submitted for Sea Vale House, but neither included Alfred and Mary. Given the dates of the census and the letter, it is possible that they may have been travelling at the time of the census and in the confusion, did not submit a return. A pity.]

I do not dispute that Alfred might have had some sensitivity about his place of birth. Bermondsey did have a bad reputation by the middle of the 19th century and the middle classes, including the Marshalls, had moved out by the mid-1840’s. Leather and related trades and businesses had taken over the area because of the need for water. The most repellent aspects of the tanning industry, upon which Bermondsey’s bad reputation was built, were located along the river and centred on the notoriously squalid Jacob’s Island.

Alfred’s birthplace was 66 Charlotte’s Row, Bermondsey. Charlotte’s Row no longer exists but formed the frontage on Long Lane of the block of land currently bounded by Long Lane, Kipling Street and Lockyer Street, Southwark. 27  The location is about 300 metres from the Tan Yards of Bermondsey, and not adjacent, as indicated by Groenewegen (Groenewegen 1995, 20). Jacob’s Island is a further kilometre away on the other side of what was then the London and Greenwich railway line. The location is conveniently 1.8 kilometres from the Bank of England along Borough High Street and across London Bridge. The Bank itself is just 1.8 kilometres from Jacob’s Island and would have been no less objectionable than 66 Charlotte’s Row when the wind blew from the South East. Should William have chosen to walk, the route to work (red line below) would have taken him past the residence of Rebecca’s brother, Edward, at Layton’s Buildings in Southwark. 25 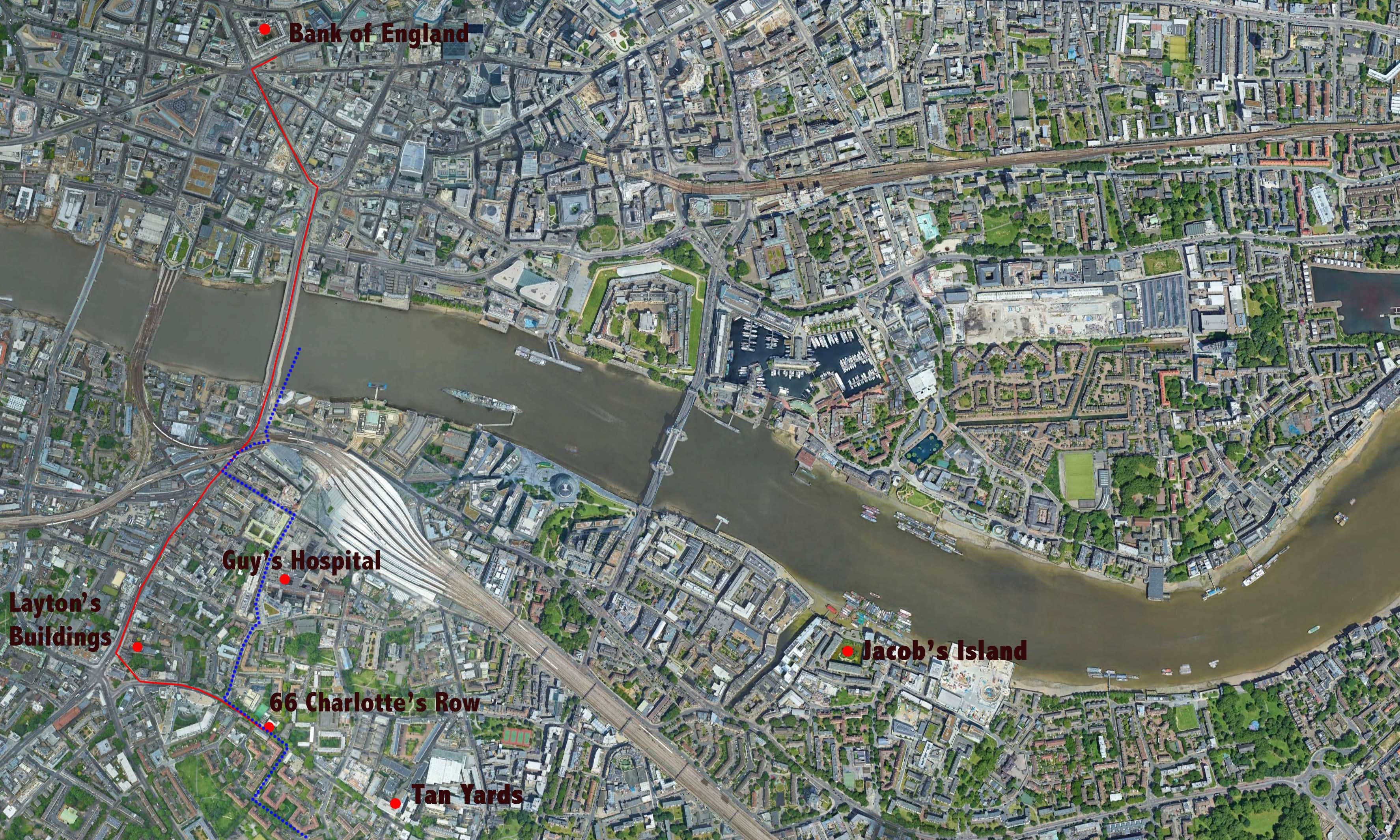 The most interesting thing about the location is that it was almost not in Bermondsey at all. At that time, Long Lane at that point was the boundary between Bermondsey and Southwark (blue dotted line). 28  The Marshalls lived only 10 metres from social salvation.

Coase’s and Groenewegen’s pursuit of this matter seems rather overblown, although the supposed intrigue does add to their thesis of a deceitful family. This whole debate might well not have occurred, had William just had the foresight to rent premises on the south instead of the north side of Long Lane in a suburb not associated with tanning and its accompanying smells.