The Stevens family home in Witham

Richard Walford Stevens was born in London. His mother died soon afterwards and he and his siblings moved to Witham in Essex which was his mother’s home town and where his father practiced as a solicitor. In August 2016, Megan and I went to Witham to trace the family home and any other information we could find on the family. Janet Gyford, a local historian, very kindly showed us around and provided us with a lot of local knowledge.

Witham is an old town. Evidence of settlement dates to the Bronze/Iron age period – c 2,000 BC – at Chipping Hill (which is where the St Nicolas church is located). The Iron Age hill fort was used by the Romans and later became a Saxon manor. The main street of Witham, Newland Street, is laid over the old Roman road from London to Colchester (which was an important Roman centre). Anglo-Saxon records from 912 indicate that King Edward was involved in the establishment of a fortification at Witham which was probably at Chipping Hill using the older Iron Age structure. (‘Chipping’ derives from the Old English ‘ceap’ which means market.)

The parish church of St Nicolas was established around this time and artefacts from this time are visible under the current church.

The earliest surviving portions of the current St Nicolas church are 12th century, but the church was extensively rebuilt from c1330. The upper storeys were remodelled in the late 18th and early 19th centuries. All Saints Church, Guithavon Street was built in 1841 as a chapel-of-ease for St Nicolas. It is possible/probable that the events recorded for the Stevens family in the St Nicolas parish records actually took place here as it is very close to their residence. All Saints was taken over by the Roman Catholic church in 1971.

The records show quite definitively that the Stevens family was resident at 100 Newland Street, Witham for much of the 19th century. The property is referred to as Batsford although the current building has the name Battesford displayed on its façade.  GGGrandfather Richard Stevens is shown as residing in the house in the 1841 census. He died in the house in 1902 by which stage the house was owned by his son-in-law, Frank Postle Bawtree, who owned it until his death in 1912.

Janet Gyford has compiled a set of references from the Essex Records Office that indicate: 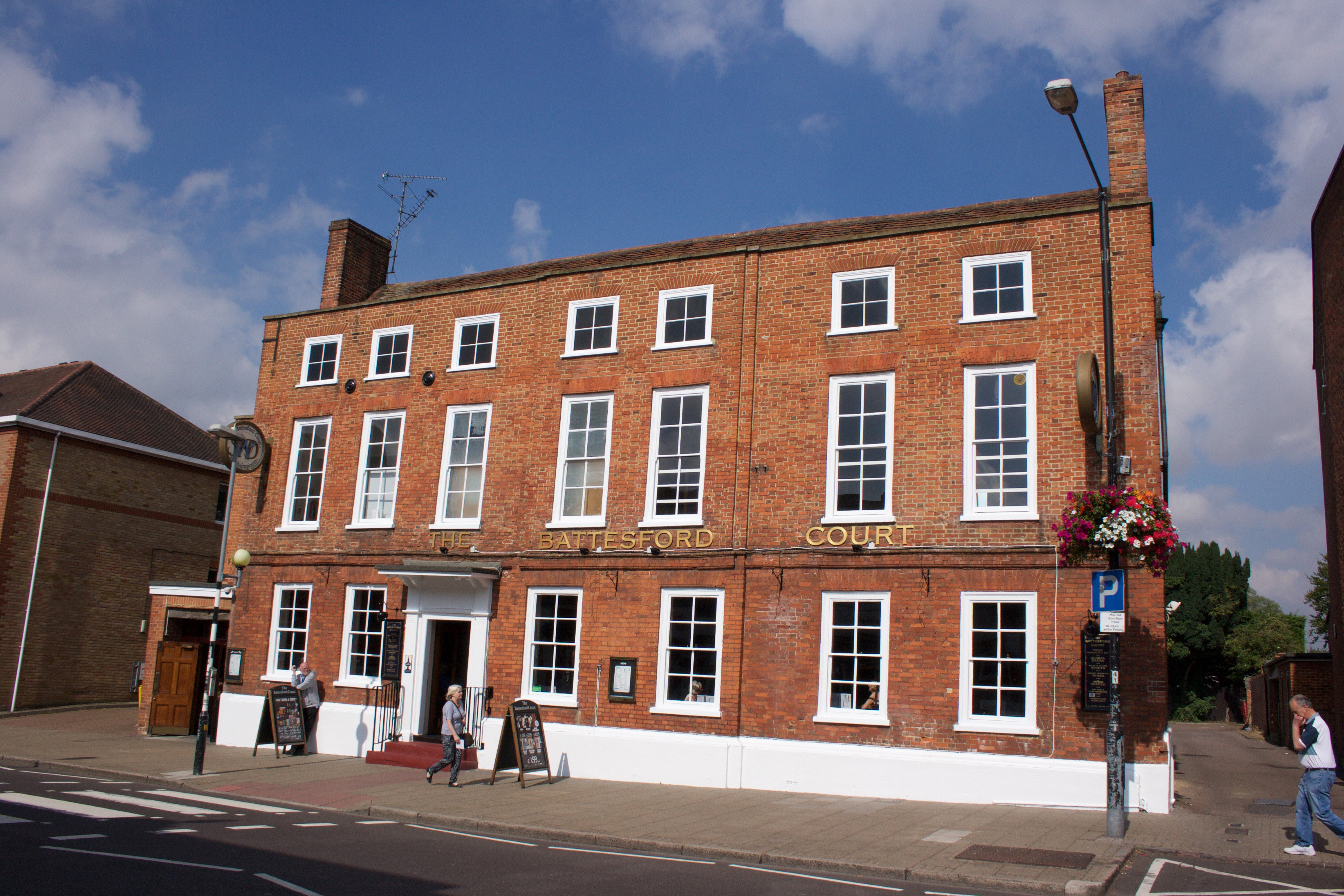 This façade is much like it would have been during the 1800’s. The Wetherspoon addition can be seen peeping out on the left where there is now a second doorway into the building. The façade exaggerates the height of the building. The top row of windows is in fact false. They are above the roof line of the actual building behind the façade.

The picture below shows the side of the building with the original building having a pitched roof. The line of connection between the façade and the old chimney can be seen quite clearly. At the right angle, daylight can be seen where the drain pipe enters the brickwork and connects to the gutter at the front of the pitched roof behind the façade.

The apparent top storey is above this gutter line.

Looking at the building from the rear, the white, pitched roof building is the original building. The front chimney is for the north-east front room shown below and the rear chimney for the back room, also shown below. The small pitched roof behind the fence is for the well which is original. The brick building on the right is part of the Wetherspoon extension.

The following two photos show the interior front section of the house. The first is from the centre line just inside the main door towards the north-east fireplace. The second is from the same place towards the south-west. There has undoubtedly been some remodelling of the layout to accommodate the pub business. The south-west view shows the new entrance and the main bar peeping in from the right. The south-west fireplace has been removed although its external chimney remains.

The north-east corner would have been one of the front rooms of the house. The interior NW-SE wall line is preserved and can be seen sticking out on the front left of the photo on the left. The top part of the wall has been removed, but the bottom part remains. The timber work, brickwork, fireplace, windows etc are original (or at least appear to be so). They are clearly very old.

The wooden frame style of construction suggests a building older than 1690 which is in keeping with the record presented above, but I am no expert.

The back room has similar brick and timber work. The significant oak framing for the house can be seen quite clearly.

The internal staircase now goes up to the toilets and a private area for the pub so there is nothing to see up there. The staircase itself, however, seems to be original – albeit with modern carpeting.

It was rather atmospheric sitting in the ancestor’s house having dinner even if it was just pub food. In fact, we probably would not have been able to have dinner in the house if it weren’t a pub.